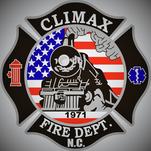 The Climax Volunteer Fire Department was started in the spring of 1971 by a group of concerned citizens in response to an urgent local need for fire protection. The department was operated primarily on fundraisers such as fish fry’s, auctions, and hot dog suppers for many years until receiving fire tax revenue from each county. This initial local need for fire protection has grown tremendously through the years to encompass many more services other that fire protection to be provided by the department. The department currently provides medical first responder and EMT response; technical rescue response in the areas of vehicle, machinery, and farm rescue; hazardous materials operational response; and fire response for structures, vehicles, equipment, and wildland. The department also provides many more services to the community such as blood pressure checks, public fire and life safety education, fire extinguisher training, smoke detector installation, and more.

The current Climax fire district encompasses an area of 46.5 square miles combined between Guilford and Randolph Counties. The original department began with only one fire station in Guilford County and grew to two fire stations, one in each county. The department became a combination organization in 1991 by employing 1 paid position within the department to now over 15 paid employees. The Climax Volunteer Fire Department achieved a remarkable task in June of 2000 by receiving an ISO Insurance Classification grade of 6 from a previous 9s rating. This has helped the department to ensure the lowest homeowner’s insurance rates anywhere in the country for our citizens and has given our organization a benchmark to constantly maintain and strive to improve. The organization continues to grow and sharpen as the demands on service increase from the rapid growth in the fire district and area.